Cool Hanging Lanterns and the Feast of Lanterns

Last month I finally made it to the wonderful Feast of Lanterns in Indianapolis.  Better yet, I got to spend the entire day there with 3 wonderful potters in the Beech Grove Clay Works booth.  We had an amazing double booth under the big trees next to Brookside Creek in Spades Park. 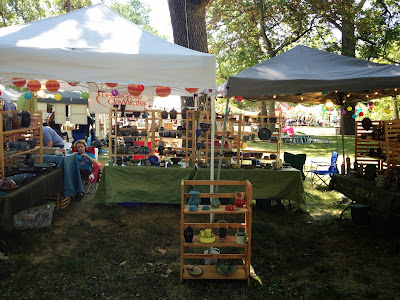 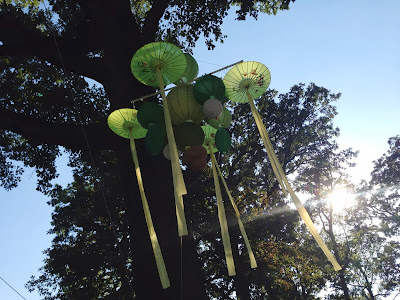 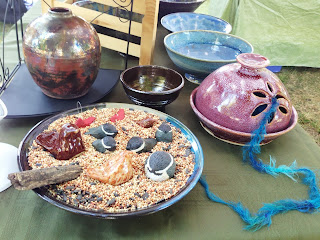 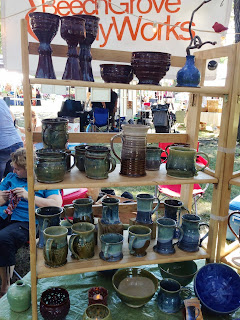 John Todd, Mike DiNapoli, Greg Osburn and I filled our pottery stall to bursting with lovely pottered things. And to my great delight, they hefted and schlepped all of my stuff for me, since I was still in my post-ankle surgery cast. 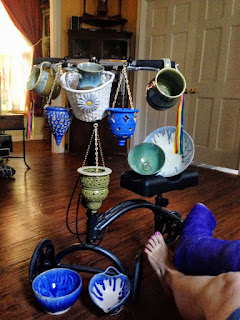 Then we spent a delightful day visiting, relaxing in lawn chairs and selling our wares to delightful festival goers until very late that night.  And we got to see all of the lanterns get lit as darkness fell. 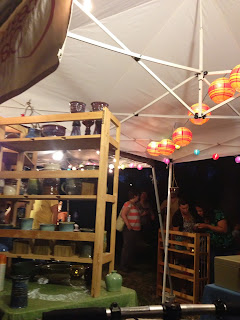 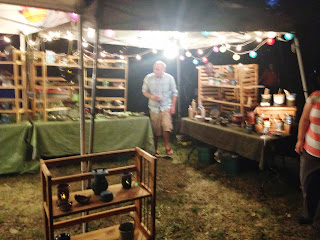 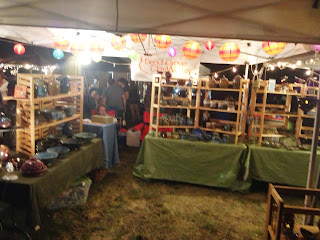 In the weeks before the Feast, I decided to try out some new techniques, creating hanging luminaries.  I created a few different kinds.  For both kinds, they' are closed forms.  Thrown on the wheel, I raise a cylinder, narrowing the top of the form until it closes.  After it dries to leather hard, I create the cutouts for the light to seep through.  And I discovered the joy of using a power drill to create the round cutouts.  Yay! 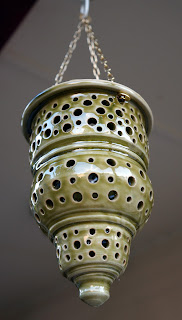 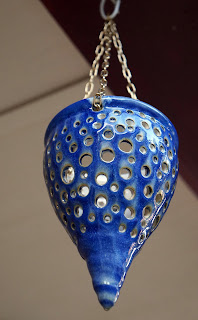 Last year, Josh from BGCW showed me how to create double walled forms on the wheel.  Instead of having the candle sit at the bottom of the form as in the ones shown above, there is actually a candle holder that floats in the middle of the form.  However, this requires a staging as I throw this form on the wheel. After I center the clay, I split the clay into two sections.  I leave a bigger donut of clay low, and on the outside edge of the wheel, without going all the way down to the wheel head between the 2 sections of clay.  I compress the floor between the 2 sections of clay.  Them I raise a smaller cylinder in the center (about the middle third of the clay).  I close the smaller middle form, then cover the outer donut of clay with a damp towel.  If I were patient, I would just let the center part of the form air dry until hard enough to carve, but I'm, rarely that patient.  I use a heat gun to dry it, then trim out the holes.  Then I uncover the outer donut of clay and (try to) create a bigger closed form over the one I just carved out.

The first photo below shows my first attempt at this new form.  I didn't quite split the clay equally enough and didn't have enough clay to close the outside form all the way.  Either way, I let the whole thing dry, and carve the holes on the outside of the form. 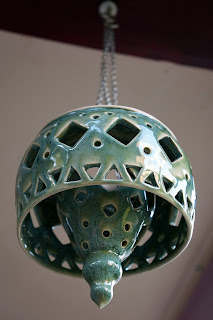 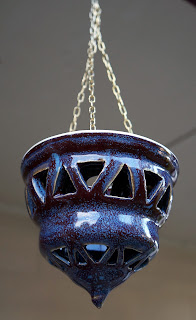 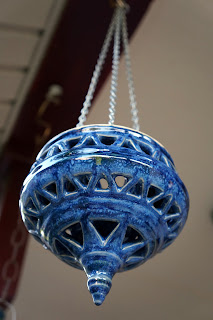 Posted by Dancing Pottery at 5:18 PM No comments: