As new folks start classes at the studio, one of the first questions is always, "How long have you been doing this?"  This is a difficult question for me to answer--one semester in college (more than 15 years ago), a few months (several years ago), and the last year.  Hmmm...17 years?  2 years?

Earlier this year, I made a conscious decision to devote more time & energy into my pottering hobby.  For the last 6 months or so, I decided that it was time to spend more than just class time in the studio.  I try to get to open studio at least one other time during the week (and then find myself staying there ridiculously late).  I finally got my own wheel at home and set up my little garage studio.  I try work from home whenever I can find a spare hour or so.  I aim to work at improving the form of everything I throw and convince myself to squash that pots that come out meh, instead of keeping them just because they came out upright.

There's still plenty to work on in the pottery learning curve for me.  Tons, in fact.  And glazing is one of the big ones.  Although I'm not producing crazy amounts of pots, I'm feeling pretty satisfied with how many more things I've made in the last few months.  But producing more pots has its dark side--so many more things to glaze!  Eek!  All I did last night at the studio was glazing.  Blech!

It seems that many potters have a love/hate relationship with glazing.  It might be because it's the last stage in the process.  Get yourself to the wheel, throw pot, flop the pot. Repeat.  Finally throw a pot that looks good, maybe even one that you love.  Manage to let the pot dry to leather hard and then trim without screwing it up.  Don't accidentally break the beautifully trimmed pot as you put it on the shelf--true story, just happened to me last week.  Sigh.  Get it to bone dry without cracks appearing.  Get it through the bisque firing without any (major) cracks appearing.   All the while, I always manage to ignore the pile of pots that are gathering on my shelf, just begging for those final steps in the process.

Maybe it's all the decisions that makes glazing so angst-filled for me.
"What color do I want?"
"How will these colors look layered?"
"Did I put too much on, is this all going to run off?"
And then deciding between dipping pieces in the studio glazes (quicker) or brushing on my small stash of bottled glazes (more options,  but more time consuming). And managing not to touch the glazed piece before it's totally dry (because it's now after midnight and I have to work in the morning) and screwing it all up.

A few weeks ago, before the studio gallery opening, I had the great joy of being at the studio when both of the kilns were about to be unloaded from a glaze firing.  Lots of the studio members were hovering around the kilns, watching the temperature readings drop to the level when it could be unloaded--so similar to the watched pot that never boils!  And when it could be finally unloaded, listening to Greg hoot with delight as he unloaded some of his pieces with "experimental" glazing that turned out beautifully. It was awesome.

However, there are the disappointments of the beautiful colors of a bowl that ended up having weird bubbly holes marring the finish of the glaze for unknown reasons.  Or the layering of colors that turned out nothing at all as expected...and not in a good happy way. 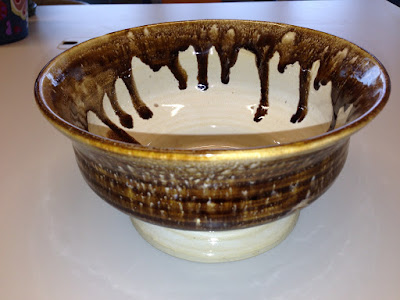 For goodness sakes, the whole point of this post was to talk about keeping a glaze journal!  Or how frustrating it can be to not keep one!  For the last month, I've been try REALLY hard to note all the glaze combinations that I've been trying on my pots. I figured out that the easiest way to make this happen consistently, is to use my iPhone.  I've long been sold on the awesome of the Evernote app.  It rocks.  (I will note its only big flaw in the footnote.)

I have set up a pottery notebook in Evernote.  When I glaze a pot, I grab my phone, create a new note with the details of the glazes and application, snap a photo of it before it's fired, and then one more photo after it comes out of the kiln.  If the glazing fired miserably, I also record what may have gone wrong and additional notes if I'm reglazing/refiring. Bingobango, this takes all of about 30 seconds per pot at most and I always have my phone handy.

So far, this has rocked!  It's well worth a try if you have a smartphone.  And as I was surfing the web for some ideas for this post, I found out that other folks are just as smart as me by using this Evernote for pottery journaling  Go figure.

**My big quibble with Evernote is the offline functionality.  Don't get me wrong, I'm using the free app version, and it's pretty awesome.  But you must have wifi or cell service to grab your notes from the cloud.  If you become a subscriber (which gets you that offline functionality) it costs $5.00 per month or $45.00 per year.  Which is a little steep for me.  Sigh.  That being said, Evernote still rocks.  For this and I especially love it for recipes.
Posted by Dancing Pottery at 2:58 PM