At every show or market, I curse the muses that led me to my very heavy, breakable art. And I'm incredibly jealous of the vendors next to me with their easy-to-pack textiles. Sigh. So I'm always trying to try new ways to lighten my load and speed up the setup/teardown times.

For the last two years, I've slowly collected all the parts for a full 10x10' market booth. Several folding tables and tablecloths with four sets of 3' tall folding oak shelves, big and little wooden crates to fill in the rest of the display space. While they look nice, the folding oak shelves are really heavy, a few of them are wobbly, and some of the shelves are starting to crack. And I've felt that the standard folding tables I use aren't effectively using the booth space. But since the shelves were something I owned before I started showing pottery, I've made do with them, since I wasn't ready to fork over the funds for new display shelves.

But this weekend at Feast of Lanterns, I tested a new shelf system--one that I built myself!! Endless websurfing for possible shelf designs found me this site with instructions for a shelving system that would be reasonably lightweight and could be stored completely flat. An added bonus was that I could make the shelves as long as would fit in the bed of my truck, about 6.5 ft.

Here's my sketch that I used to figure out what I needed to buy. 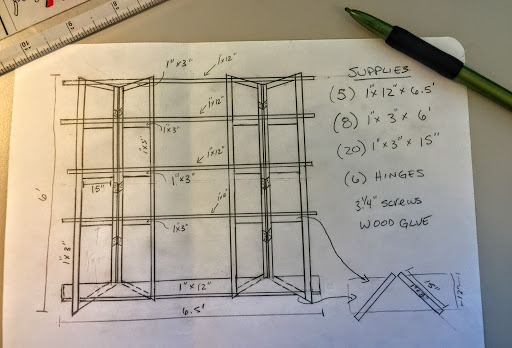 The blog post that helped me with this (Thanks, Blue Starr Pottery!) has step by step instructions. Based on some help from the Big Box Store employee, I upgraded to 1"x 3" boards for the support frames. This meant I needed to find longer screws than what was used in Blue Starr blog. And of course, I wasn't able to find 3.5 or 4" screws that wouldn't split the thin one inch boards that I was using. I could only find 3.25" screws, which added some extra drilling work. I ended up pre-drilling the screw holes through the vertical 6' frame boards--for two screws that would go through each end of the each 15" horizontal shelf support board. Then I used a larger drill bit on each hole, so I could counter sink the screws in another quarter inch. This allowed the shorter screws to get deeper into each shelf support and sank the screws so I could fill all the holes on the vertical frames.

The first of the hinged support frames took quite a while to figure out, measure, and assemble. But as soon as that first one was done, I could use it as the measuring template for the next 3 frames. Way faster!

One of the big things I worried about as I considered these new shelves was the stability. I was incredibly pleased with my initial set up in the garage once I had everything assembled. It was solid! No wobbling! Woohoo. Then I disassembled them (super quick!) and carried it all out into my yard to try it out in the grass. Even on my not-really-level-lawn, the shelves were solid even though they were tilting on the small rise on the lawn. With a few shims, I leveled the shelves and still felt good about how grounded they felt, even without the extra weight of pottery on them. 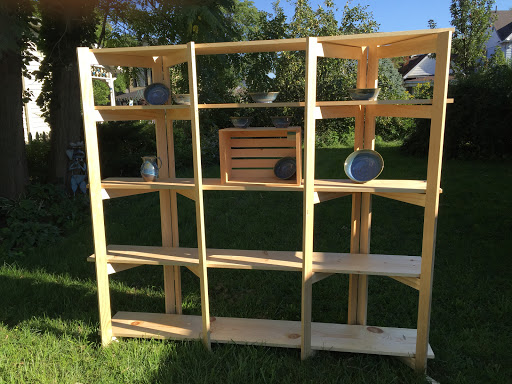 The new shelf system went on its trial run at the Feast of Lanterns. Take a look at the next post for a view of the new shelves loaded with pretty pottery. I'm pretty pleased The new shelves have a lot of pros--a more effective depth than the shelves on folding tables, one set of shelves for 6 feet rather than two sets on the tables, fits way more pottery than the old set up, and I can use my storage/transport crates on the shelves as part of the display. It does have a few drawbacks--some people don't like to bend down to the lower shelves, the top shelf is too high for some customers to get pieces down on their own, and I'm losing a lot of my "hide the ugly stuff" space under the tables.

I am considering making another set of these, which would get rid of the rest of the heavy wobbly shelves and two of the three folding tables that I have to use. I'll just need to find the time to make them!
Posted by Dancing Pottery at 8:32 AM